This is the Samoa home Rugby World Cup 2011 jersey that will be worn by the Samoan national team at this year’s 2011 World Cup in New Zealand. Samoa will look to better their performance at the 2007 World Cup, where they were eliminated the group stages.

This Samoa World Cup Jersey 2011 features the IRB logo on the left and the Samoan Rugby Association’s logo on the right, with the Kooga logo ( kit makers) below the collar.

Here are some photos of the Samoan RWC 2011 Jersey.

You can buy the Samoa World Cup jersey online at Lovell Rugby. 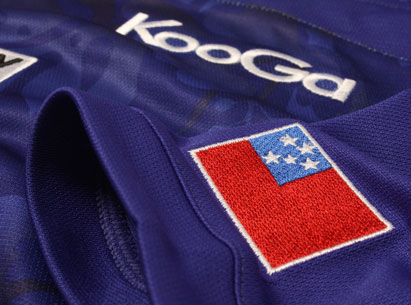