The Wales Rugby World Cup Jersey 2011 will be worn by the Welsh national rugby team at the 2011 World Cup in New Zealand. The Wales RWC jersey 2011 has been manufactured by Under Armour.

The Wales Rugby World Cup Jersey 2011 was officially unveiled on June 30, 2011, but the Welsh rugby union had started to reveal snippets of the kit on Facebook prior to its release.

The shorts accompanying the Welsh RWC jersey 2011 will be white in colour, while the socks will be red with a single white hoop. The Wales rugby world cup top is red in colour and contains the Rugby World Cup logo and the Welsh Rugby union’s logo on either side. It also contains the Underarmour logo on the top, as can be seen in the photo of the kit below. The jersey will be made of military fabric ( Cordura) and uses the “Armourgrid” and “Armourcontrol” technologies of Under Armour. 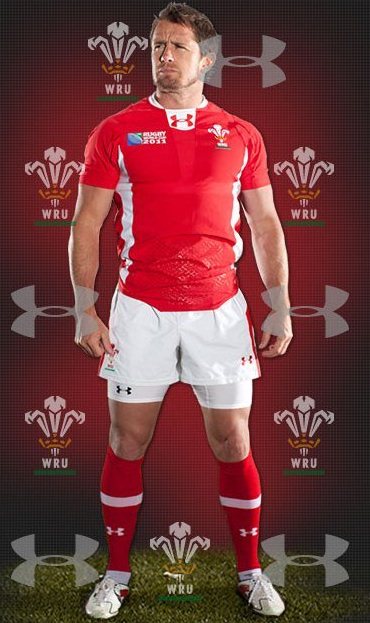