This is the white Wallabies rugby world cup jersey 2011, which will serve as the Australian national rugby team’s change jersey during the forthcoming 2011 Rugby World Cup in New Zealand. The Wallabies are one of the favourites at this year’s Rugby World Cup along with the likes of South Africa and New Zealand.

This Wallabies World Cup jersey 2011 has been made by KooGa. Australia have however only worn an away jersey once at a previous World Cup- when they took on Romania in the 1995 edition of the tournament. Kooga had initially thought of making this Australian away jersey a green and gold affair, but chose not to after realising it would clash with South Africa’s shirt.

This Wallabies World Cup top is predominantly white in colour, with gold shoulders, side panels and sleeves. It has the KooGa Logo, Rugby World Cup logo and the logo of the Australian rugby association. 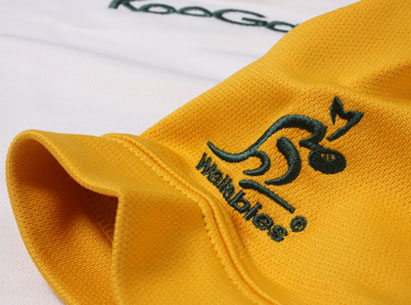