The Sharks throw open the South African conference as they beat the Stormers 25-20. Tries from Michalak, Daniel and Mvovo for the Sharks, with Gio Aplon scoring twice for WP. Also a must watch- Beast Mtawarira showing great strength to hold Anton Bresler in the air.

Sharks prop Tendai Mtawarira showed great strength to hold lock and teammate Anton Bresler in the air during his club’s game against the DHL Stormers on May 26, 2012 at the Shark Tank ( Mr.Price Kings Park, Durban). Bresler was in danger of landing awkwardly, but Mtawarira, better known as the Beast, showed his tremendous strength to keep Bresler in the air and gave him a safe landing.

Here is a photo of Mtawarira holding Bresler in the air. The Sharks won the game 25-20 with flyhalf Freddie Michalak, skipper Keegan Daniel and winger Lwazi Mvovo scoring tries. 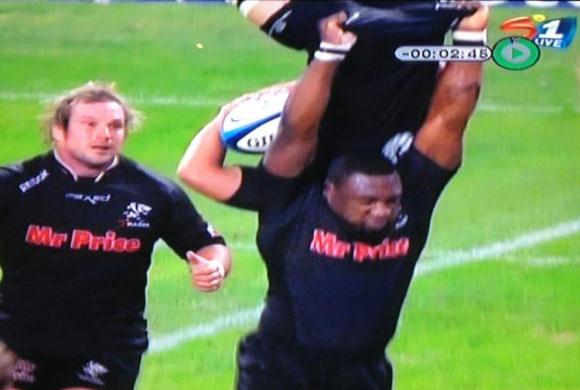 The Beast holding up Bresler incident happened twice during the game, but the first one was the one that had the crowd applauding.

Bresler is well over 100 kgs, so for the Beast, even with his own strength, to hold him in the air the way he did, was quite something.

France and Ireland play out an entertaining 17-17 draw in Paris. Ireland were the better team in the first half and lead 17-6 thanks to two Bowe tries but France roared back in the second. Dogged defensive effort from the Irish, who lost Connor Murray to injury in the second half.