This Quade Cooper tackle on Berrick Barnes saw the Red No.10 sin binned and given a white card that threatens his participation when the Reds host the Sharks in their quarterfinal next weekend. Cooper’s tackle on Barnes occurred in the final round Super Rugby game between the Waratahs and the QLD Reds on July 14, 2012 at the Suncorp Stadium. END_OF_DOCUMENT_TOKEN_TO_BE_REPLACED

This headbutt between Alasdair Strokosch and Joe Ansbro took place after Greg Laidlaw had kicked a decisive penalty after the siren to give Scotland a famous 9-6 win over Australia in Newcastle, NSW on Tuesday, June 5, 2012 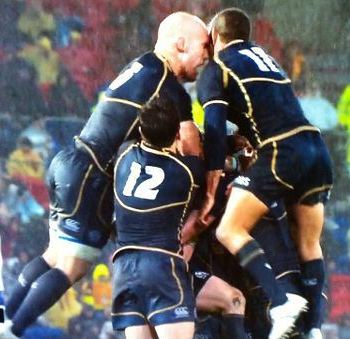 With the scores tied at 6-6, Scotland earned a penalty and Laidlaw kept his cool in stormy conditions to slot home. The scene sparked celebrations and resulted in a collision of heads between Strokosch and Ansbro END_OF_DOCUMENT_TOKEN_TO_BE_REPLACED

Bryan Habana scores the winning try of the game after some great work from Siya Kolisi as the injury hit Stormers upset the Vodacom Bulls at Loftus. END_OF_DOCUMENT_TOKEN_TO_BE_REPLACED

The Rebels suffer a heavy defeat after consecutive wins over the Force and the Crusaders as they are walloped 66-24 by the Hurricanes. Nine tries scored by the Canes, with Beauden Barrett also having a great day with the boot as the Rebels were thrashed.