These are the new Sharks jerseys 2012, the home and away shirts to be worn by South African rugby union outfit Natal Sharks in the 2012 Super Rugby competition. The new Sharks Super 15 2012 jerseys have been made by Reebok. The Sharks finished 6th in Super Rugby 2011 and were losing finalists in the 2011 Currie Cup, finishing second best to the MTN Golden Lions.

The Sharks’ new Super Rugby 2012 jerseys have the same design as the 2011 kits ( inspired by the sunrays over the KZN coast), but there are minor differences, such as the placement of kit maker Reebok on the shirt.

With the likes of the Du Plessis brothers ( Jan Nathaniel and Bismarck), Keegan Daniel, JP Pietersen and Patrick Lambie in their squad, the Sharks will be hoping for a good Super 15 2012 season.

Mr.Price continue to be the principal sponsors of the Sharks 2012 jerseys. The home Sharks Super 15 top is black in colour, while the alternate/away shirt is white.

Also check out our Super Rugby section for other Super 15 jersey releases for the 2012 season. 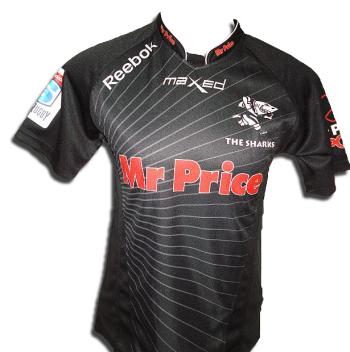