This is the new Wales away Rugby World Cup jersey, to be used by the Welsh national team as their alternative/change/second strip for the forthcoming 2011 Rugby World Cup in New Zealand. The new Welsh away RWC 2011 jersey has been made by Under Armour.

This Wales away RWC 2011 jersey is black in colour with red panels. It features the IRB World Cup logo, Under Armour logo ( below the collar) and the Welsh Rugby Union’s crest. Wales will kick off their World Cup 2011 campaign against South Africa on 11th September, 2011 at Wellington. 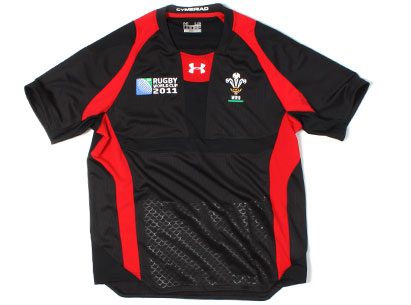